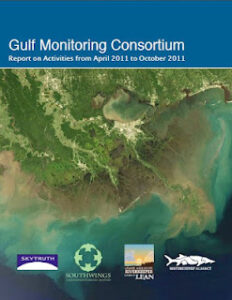 Back in April 2011, SkyTruth, SouthWings and Waterkeeper Alliance joined forces to coordinate our responses to oil pollution in the Gulf of Mexico.  Calling our partnership the Gulf Monitoring Consortium, we’ve worked by space, air and sea to investigate reports and rumors of pollution incidents.  Along the way we’ve identified spills not reported to Federal agencies, like this discharge from a platform along the Louisiana coast, and a leak from an offshore well in Breton Sound.  We’ve chronicled the continuous, ongoing leakage of oil from wells owned by Taylor Energy that were damaged by Hurricane Ivan more than seven years ago.  And we’ve looked into the continuing confusion surrounding the repeated sightings of oil near the Macondo well, source of the BP / Deepwater Horizon tragedy in 2010.

We’ve produced a brief report that summarizes the Consortium’s activity from April to October 2011, includes fact sheets on key investigations we’ve conducted, and discusses our findings so far, including:

We also estimate, based on our analysis of NRC reports, that as much as 2 million gallons of oil may have been spilled from October 2010 through September 2011 — nearly ten times more than reported by the polluters themselves.