The Gulf Monitoring Consortium (GMC) is a rapid response alliance that collects, analyzes and publishes images and other information acquired from space, from the air, and from the surface in order to investigate and expose pollution incidents that occur in the Gulf of Mexico and Gulf Coast … Continue reading →

On Jan. 20, Taylor Energy will host a public forum in Baton Rouge, La., to explain what efforts they have taken to respond to the ongoing oil spill in Mississippi Canyon Block 20 (MC-20) – the former site of Taylor Energy Platform #23051. Over eleven years ago Hurricane Ivan triggered a subsea landslide which destroyed the platform and buried 28 wells under a hundred or more feet of mud and sediment. The spill first came to public attention during the 2010 BP/Deepwater Horizon disaster, when GMC charter member SkyTruth observed the leak on satellite imagery and began investigating with GMC assets in the air and on the surface.

Undated photo of Taylor Energy Platform #23051 before it was destroyed by Hurricane Ivan in 2004. Image Credit – Taylor Energy

Oil still leaks from the site to this day, eleven miles off the coast of Louisiana, while the now-idled company’s efforts to stop the leak have remained a carefully guarded secret. In early 2015, an AP investigation pressed the U.S. Coast Guard to increase their estimated spill rate to an amount 20x higher than Taylor had ever acknowledged. In Sept. 2015, GMC partners, including the Waterkeeper Alliance, settled a law suit over the company’s lack of transparency about efforts to fix the leak. This forum was a condition of that settlement.

The Gulf Monitoring Consortium has the following questions for Taylor Energy, which, in one presentation posted in advance to the forum’s website called the events surrounding Hurricane Ivan, an “Act of God“.

1) What is the plan to stop this leak?

2) If the plan is to just let it go for the next 100 years, what research has been done to determine that the environmental harm would be minimal and acceptable?  Why wasn’t the public involved in that decision making?

3) What lessons were learned and are they being applied to new permitting and drilling in the Gulf?

4) What is the estimated cost to the public of the lost oil and gas revenue if the decision is made to let the reservoir bleed out?

5) What were the various interventions that were deployed on the seafloor to try to capture the leaking oil and gas? How much oil and gas did they capture, and during what time periods?  What was done with the captured oil and gas?

To attend, you are asked to register.

On August 6, five environmental organizations comprising the Gulf Monitoring Consortium announced their findings from a review of pollution reported from petrochemical and fossil fuel processing facilities during and immediately after Hurricane Isaac. You can read more about our Key Findings or jump right in and read the full report. 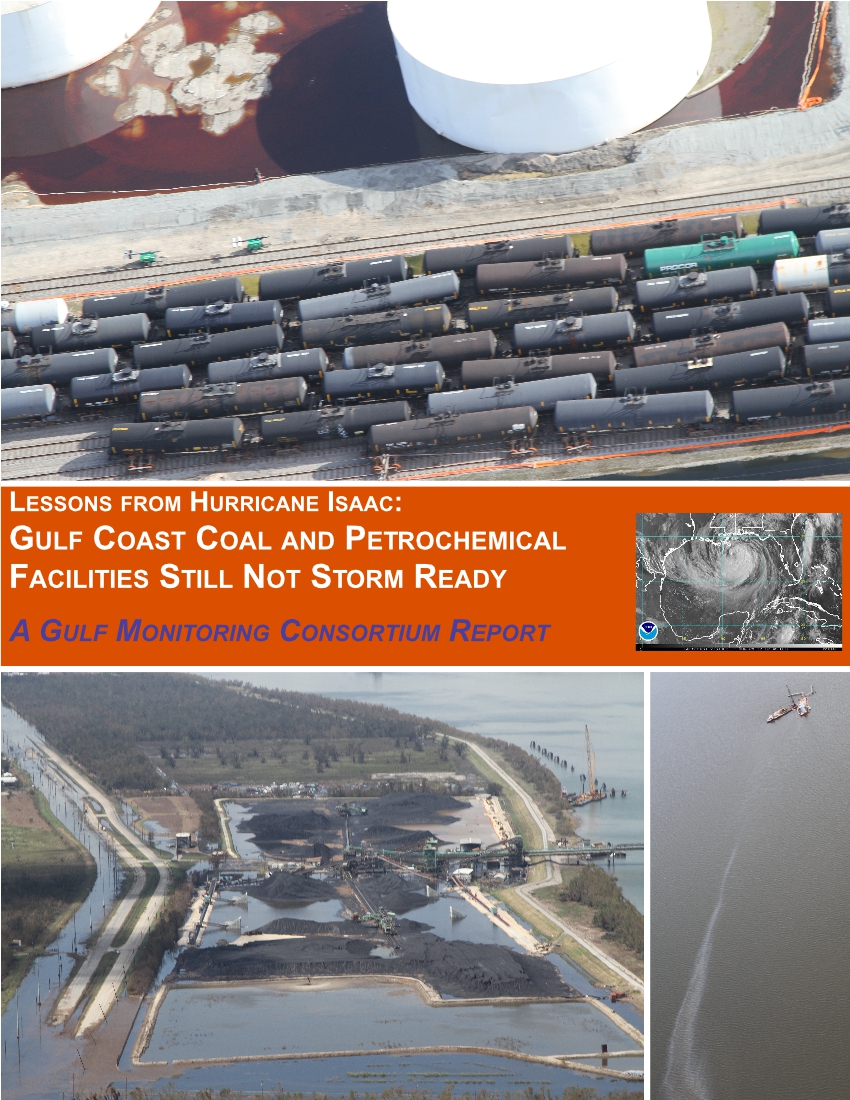